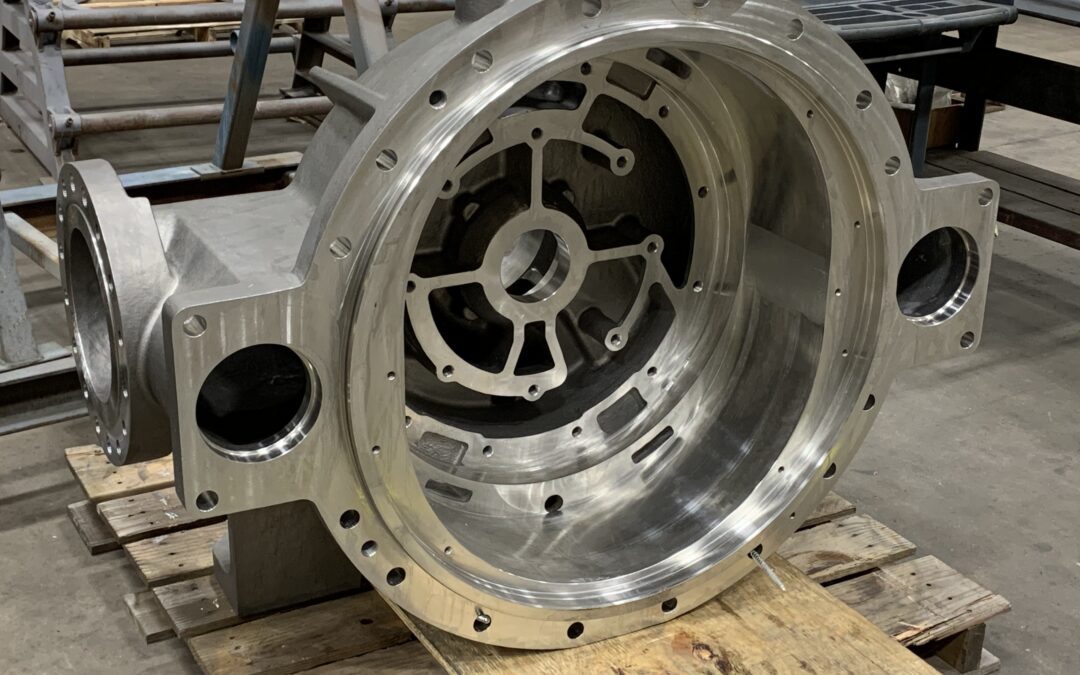 Our repair and upgrades to these compressors focuses on several areas of the compressor
• Material upgrades to impellers and shafts
• Rotor dynamics (especially in the overhung configurations)
• Bearing upgrades to reduce thrust bearing failures
• Laser overlays to prevent rotating and non-rotating components from galling
• Repair of expensive replacement components (i.e. impellers and distribution cones)
• Restoration of efficiencies due to mechanical misalignment
• Impeller redesign based on FEA analysis (excitation of natural blade frequencies)

RMS MEPCO would be glad to partner with you to repair and upgrade your fleet of liquid ring compressors and vacuum pumps encompassing all makes and models such as:
• All Nash and Garo models
• Devi
• Flowserve/Sihi all models
• Bergeron
• Travaini

The RMS MEPCO team recently took on a NASH liquid Ring Compressor failure for a customer in the oil and gas industry. This Nash Compressor was sent to the MEPCO shop for a detailed inspection to determine the root cause of the failure as well as a path forward in regards to repairs and upgrade opportunities.

The initial inspection of the Nash Compressor started with a detailed visual inspection that required photos to be taken as well as critical measurements. The inspections took place on a qualified flat milled top table where the soft foot was documented. During the visual inspection, the team noted the Thrust End (NDE) mechanical seal body had a goldish tone, which indicated that this seal had been very hot. The Rotating collars on both mechanical seals were protruding out from the glands past normal setting positions and it appears these seal collars were set before bolting seals to compressor body.

With the Split Line Bolts loosened, the team was able to separate the casing halves to continue their inspection. The team dry stacked the compressor to measure the total float of the compressor. Damage was noted on the drive end of the impeller. OD of the impeller blades was severely damaged and visual cracks were noted on the inlet side of the DE vanes. There was a large portion of a single blade that was missing and remnants of the blade material were found at the bottom of the NDE case. A blade fragment had lodged between the eccentric portion of the case, causing the blade damage on the drive end. This thrusting caused severe contact rubs on the DE distribution cone, which locked up the impeller. Luckily no comparable damage or cracks were noted on the NDE side of the impeller.

Vane cracks all emanated from the inlet side and progressed outward toward the discharge side of the vane. All of the components were blasted clean, PMI’d, and NDT’d for a detailed report of the damage.

An FAE study was performed to further inspect the compressor. This study confirmed that process spikes can excite the natural frequency of the impeller vanes, and likewise, a rub with the distribution cone can also excite the frequency of the vanes. The team was also able to confirm this impact was similar on both cast and forged impellers, with the cause of failure identified. Failure begins as a low cycle fatigue crack, which propagates very quickly into a ductile failure of the vane.

To correct this design flaw, the RMS Engineering team went to work redesigning the impeller to avoid these problematic frequencies. RMS’ engineering team can redesign this impeller and run advanced models to test its effectiveness, thanks to advanced analysis and scanning tools. Along with a redesigned impeller, the RMS team can correct the compressor’s misalignment and repair and upgrade the impeller’s distribution cones instead of sourcing a replacement. RMS is currently working on this upgraded compressor and plans to send it back to the customer shortly.